Bangalore, May 31, 2018:  At an awards ceremony Rotary Club of Bangalore announced winners of the McIver Awards. These awardees hail from different backgrounds and organizations but have proven their calibre by contributing to the improvement of others in this city. These role models are an inspiration to the society and deserve the recognition. The Rotary Bangalore McIver Awards are named after the founding President of Rotary Club of Bangalore, Rtn L.J. McIver, ICS. This is Rotary Club’s initiative towards recognizing those who have achieved excellence in their chosen vocation & contributed outstanding service to the society.

The Chief Guest for the ceremony was the Maharaja of Mysore, Maharaja Yaduveer Krishnadatta Chamaraja Wadiyar who presented the awards and District Governor Rtn. Asha Prasanna Kumar graced the occasion with her presence.

Speaking at the occasion Rtn Zarir Batha, President Rotary Club of Bangalore said, “The McIver Awards are a reminder that there are many among us who work towards the greater good of the society. As we delved through the list of nominees, we realized that we had to make tough choices while deciding on the most deserving. These individuals and corporates touch people’s lives by making a positive difference and each year it is a humbling experience for us. Rotary Club of Bangalore is proud to be in such august company.” 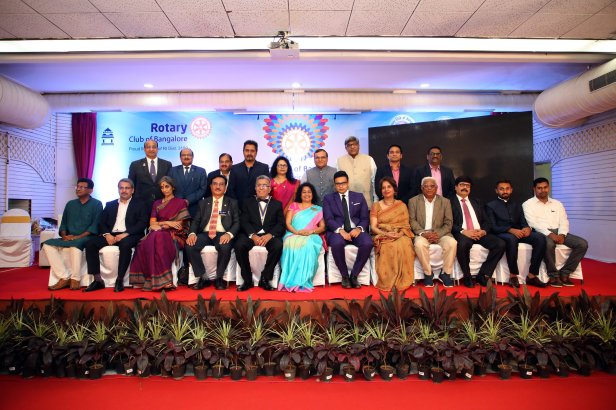 The winners of the 9 categories are:

1) Citizen Extraordinaire: Ambassador Nirupama M. Rao. She is a Bangalore citizen and a retired diplomat who has made her city proud and put it up on the International Map.

2) Corporate Citizen Award: Bangalore International Airport Ltd. Represented by Managing Director Mr. Hari Marar, A Corporate with high ethical standards. This corporate citizen has made a difference to the lives of its stakeholders and has touched many lives.

3) Making a Difference Award: Azim Premji Foundation. Represented by COO Mr. S Giridhar. An NGO that has provided outstanding service to the community in the field of literacy by creating a level playing field for the economically challenged.

4) Pride of Workmanship: Javad Poovalappil was awarded as he takes great pride in his work at NIMHANS.

5) Environment Conservation: Dr. AN Yellappa Reddy. This award recognises his significant contribution in conserving the environment. He is the green warrior who espouses green economics. He can be the person to convert Bangalore’s increasing concrete foot print to green cover.

6) Youth Icon: Shreyas Gopal is an inspiring role model for the youth of Karnataka. This award recognises his immense contribution in the field of cricket.

7) Women’s Empowerment: Madhu Bhushan is no stranger to activism and fights for citizens’ rights. This award recognises her efforts in empowering underprivileged women and educating them.